At the age of twenty Ted joined the Navy on the 14th of October 1940 at Hobart, Tasmania, at the depot called “H.M.A.S, HUON”.  After some training there and at Flinders Naval depot in Melbourne he was drafted to “HMAS Kuttabull”, an old Sydney Harbour ferry, commandeered for accommodation at Garden Island.  That was the vessel that the Japanese midget submarines torpedoed and killed 19 ratings when Sydney was attacked.

On 5th June 1941, Ted, now an Able Seaman, was stationed as a loading number on a four inch twin barrel anti-aircraft gun on “HMAS Hobart”.  Further training saw him a range taker and stationed near the bridge in the 4″ Director Control tower, later being promoted to the 6″ D C Tower, general duties being his lot whilst the ship was in Port.

Ted soon became the Commander’s coxswain, utilising a 14 foot boat for conveying confidential messages to other ships and ashore.  In Naval terms the Commander’s boat is always called ’The Jolly Boat’ and was, when in port, always secured under the pole extending at the bow.  Ted was therefore similar to the ‘Don R’ in an Army establishment – always ready on the dot for messages or conveying super cargo.

“HMAS Hobart was involved in many actions during his four and a half years with the ship, and it became known as the “lucky ship”.  Ted recalls that when in the middle of the Indian Ocean an exhausted Albatross landed on the fore-deck.  The crew gave it food and drink and it flew away.  There is an old sea faring proverb with sailors that if ever an Albatross lands on a ship at sea and survives, then that ship will never sink.  And so it was with the “HMAS Hobart”.

During the night of 20th June 1941, at 2200 hours, the Hobart slipped out of Sydney Harbour for the Mediterranean.  She entered the Suez Canal, but was forced to reverse out of the narrow channel because mines had been dropped ahead by enemy planes.  History recalls the intensive bombing by German aircraft on the Suez Canal and to shipping at Port Tewfik, the entrance to the Canal.  Ted’s initiation to bombing there was intense, for the Germans persisted for four and a half hours that first evening.   During the night “HMAS Hobart” moved its anchorage twice.  That albatross knew what was going on, for each time the spot where the Hobart had just left was bombed.

Nearby, only 300 metres away, the crowded troopship “Georgic” was hit by a stick of bombs and caught fire.  The “Hobart” lowered its boats, set up a medical post ashore, and ferried troops to safety.  Meanwhile in attempting to beach the “Georgic” it collided and interlocked with another ship, the “Glenearn” which also caught on fire.  In the dark of night, the Hobart was so close that the steel plates could be seen to be red hot and buckling, with intermittent explosions.

During these crucial periods when all hands were ‘Up’, that is at Action Stations and every man having a specific place on the ship for a considerable period, food was still required. Each section would send a man to the galley to get some ‘Tiddy Oggies’.  Tiddy Oggies were pasties made from M & V, tinned dog or whatever ingredient the cook found expedient to feed the massive crew.

Dawn revealed a sorry sight.  Two big ships, on fire, locked together and beached. Later that day the Hobart towed the “Glenearn” free.  The “Georgic”, despite being completely gutted, was later salvaged and in post war years carried Greek migrants to Australia.

The Mediterranean was reached on the 16th of June, and Alexandria Harbour the following day.  There the “HMAS Perth” was waiting to return to Australia, leaving next morning. She had been severely damaged during the evacuation of Crete.  The naval historians have recorded how the “Hobart” valiantly operated in the Mediterranean until the Japanese entered the War.  Two days later, on 9th December, she set sail for Fremantle, and by 20th January she was in the South China seas.  “HMAS Perth” was sunk on 27th February 1942 in the Java Seas Battle.  “Hobart” was some 300 tons short of fuel which prevented her from rushing to the aid of its stricken mate.

By 14th April 1942 “Hobart” was back in Sydney for a clean-up. On the 1st of May “Hobart” and “Australia” steered north and participated in the “Battle of the Coral Sea”.  That battle prevented the Japanese from landing on Australian soil and turned the tide of the invading forces.  The outstanding cruiser Captain Harry Howden left the ship after the battle.  Ted recalls how the skipper watched the bomb bays of the high level bombers being opened. He then would slew the ship around by reversing two motors, dodging the falling bombs. The ship creaked and shuddered but survived.

To the “Solomon Islands Landing Campaign” on 7th August 1942 with a new Captain, H.A. Showers, was the next mission.  Although it was a successful campaign there were severe losses, for three American cruisers and “HMAS Canberra” were sunk.  After patrolling in the Coral sea for some months “Hobart” joined Admiral Halsey’s Task Force No 74 which was based at Espiritu, Santo (north of the New Hebrides) on 16th July 1943.  Whilst on patrol duty with “HMAS Australia” 300 miles West of the New Hebrides on the 20th of July 1943 Hobart was hit by a single torpedo.   It did considerable damage to the port quarter. 13 men were killed and 7 were wounded.  Ted was lucky, for he was on the bridge at that moment.  Less than five minutes later he would have been at the fatal spot.  A bird lover, he remembered the albatross!  Repairs were made at Espiritu, the ship then returning to the dock in Sydney for major repairs.

Ted was returned to “HMAS Huon” during the overhaul, returning to the great ship when it sailed to the Philippines, New Guinea and Borneo, and finally to Tokyo. There on Sunday, 2nd September 1945, aboard the “US Missouri” the signing of the surrender was effected. 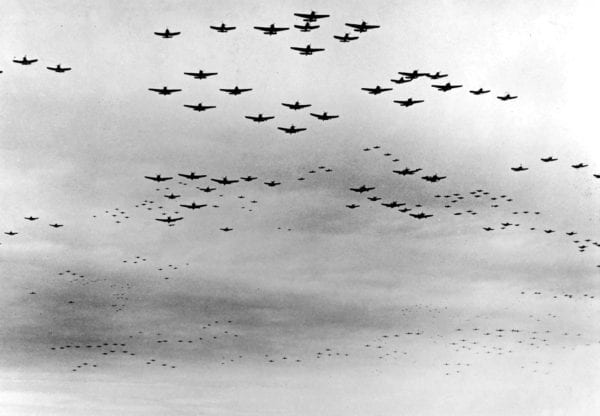 From the deck of H.M.A.S. Hobart, Ted Dyas and Joe Anderson watched more than a thousand aircraft fly over USS Missouri in Tokyo Bay.

Nine days later the famous “HMAS Hobart” returned to Sydney, eventually to be stripped and sold to the Japanese as scrap.  But the ship showed reluctance to go, and caused considerable trouble to the purchasers, breaking away from the contractor’s tugs in the Great Barrier Reef.   It was towed back to Brisbane for some modifications before it was subdued.  Ted was discharged fit and well on the 22nd of November 1945 after serving five years in the Royal Australian Navy.

Fifty years after the day that the torpedo struck, Ted, on 20th July 1993, celebrated at Anzac House, Perth, with a few of his surviving jack tars.