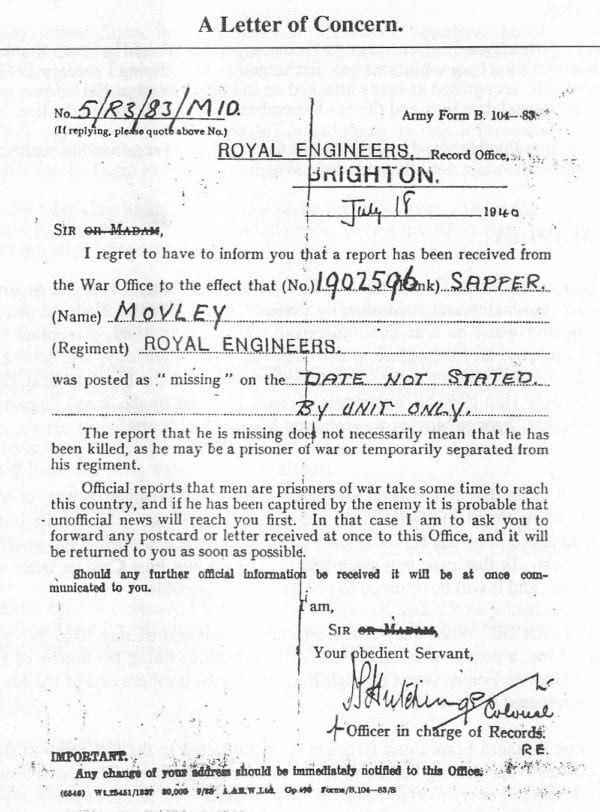 Laurie was born in Stratford, Connecticut, U.S.A. on 17th February 1918.  He is American by birth, British by Nationality and Australian by Choice.  He is a British National, for his family returned to England when he was three years old.  He was, in 1939, a member of the 677 Construction Company, Royal Engineers, and later “B” Field Company.  He served in France with the Royal Engineers during 1939-40 and was evacuated off the beach at Bray Dunes north of Dunkirk.

Laurie was born in Stratford, Connecticut, U.S.A. on 17th February 1918.  He is American by birth, British by Nationality and Australian by Choice.  He is a British National, for his family returned to England when he was three years old.  He was, in 1939, a member of the 677 Construction Company, Royal Engineers, and later “B” Field Company.  He served in France with the Royal Engineers during 1939-40 and was evacuated off the beach at Bray Dunes north of Dunkirk.  On July 18th, 1940, his father was advised by letter by the Royal Engineers Record Office Brighton, that ” Sapper Movley was reported Missing by his unit”.

“The report that he is missing does not necessarily mean that he has been killed, as he may be a prisoner of war or temporarily separated from his regiment.

Official records that men are prisoners of war take some time to reach this country, and if he has been captured by the enemy it is probable that unofficial news will reach you first.  In that case you are asked to forward any Post Card or letter received at once to this Office, and it will be returned to you as soon as possible.”

WHERE WAS LAURIE?  When the German attack was launched in May 1940, they ignored the famed Maginot Line, a prepared defensive line of fortifications lining the border of France and Germany.  The German Forces swept through Belgium on the northern end of the Maginot Line and behind the prepared defences.

At the same time northern France and Belgium were subjected to the full force of the German Air Force (Luftwaffe) comprising bombers, dive bombers and fighters.  The chaos brought about by the air attacks caused every road to be completely blocked with refugees going anywhere and nowhere.  They were dive bombed and machine gunned mercilessly resulting in civilian carnage of unbelievable magnitude, making the movement of allied troops virtually impossible.

At this point Field Company was formed with explosive specialists.  Small sections operated with the retreating infantry who were forming a defensive perimeter based on the evacuation port of Dunkirk.  His section consisting of a Staff Sergeant, 2 drivers (of which Laurie was one) and six sappers plus two trucks loaded with demolition equipment operated with the Guards Brigade. Their task was to place demolition charges on the bridges that the Brigade had to cross as they withdrew. As Northern France was serviced by many canals their task was difficult.

They continued with this until arriving at Bray Dunes where they dug in on the beach. It was under constant attack from the air, the artillery and small arms fire. The method of evacuation was to wade out into the seas and wait to be picked up out of the water by a small boat and transferred to a larger ship. He was put on the destroyer H.M.S. Ivanhoe, which was later sunk, and returned to Dover.

They were immediately put on a train which when full to overflowing departed, making room for another train. The complement was made up of allied troops of all types.  The train stopped at various stations which were full of civilian volunteers.  These people handed out food and drink and clothes in which they were in need, as they had not had any organised food for days. and only had the clothes that they stood in.

Eventually they detrained at Winchester and were billeted in the Rifle Brigade Barracks. After a few days, any Royal Engineers were sent to Newark, and again from Newark to Ripon, a Royal Engineers Field Company Depot.  Laurie’s unit was found at Upper Heyford, an R.A.F. bomber station in Oxfordshire where their task was to repair the runways after bombing raids.  He re-joined his unit along with two other members about the 14th July.

With the threat of invasion by the Germans who were massed on the coast of France 22 miles away, reorganisation of the fighting forces was priority One.  All this was taking place while all the major centres were under heavy air attack. Civilian and service personnel casualties were horrific.

On reaching England he was Commissioned into the 7th Battalion Royal Northumberland Fusiliers and served in Northern Ireland until 1943.

After returning to England in 1943, he was promoted to the rank of Captain, training in Combined Landing Operations.  He commanded a Mortar group of the Northumberland Fusiliers, the Fighting Fifth, which landed on Sword Beach, Normandy the day after D Day.   In repelling a German counter attack the unit put their barrage down at such a speed that a captured German Artillery Officer asked to be allowed to see the belt-fed field guns, for he did not believe it possible to gain such a speed by hand.

Laurie was wounded in Zettin, outside Arnhem, Holland in 1944 and hospitalised in Ghent, Belgium.  He returned to active service in 1945 as second in command of “A” Company, of the 1st Battalion Leicestershire Regiment, an infantry Rifle company.

When Germany capitulated, he was made a Brigade Staff Captain and took control of a ration supply dump in Germany, servicing 93,000 displaced persons and former prisoners of war.  He remained there in Germany until he was demobilised on 1Ith July 1946.

On 16th May 1951, living in Flora Terrace, he joined the North Beach Sub-Branch.

Prev
Next
Scroll to Top
We use cookies to ensure that we give you the best experience on our website. If you continue to use this site we will assume that you are happy with it.Accept