WHY IS THIS DAY SPECIAL

From the summer of 1918, the five divisions of the Australian Corps had been at the forefront of the allied advance to victory.  Beginning with their stunning success at the battle of Hamel in July, they helped to turn the tide of the war at Amiens in August, followed by the capture of Mont St Quentin and Pèronne, and the breaching of German defences at the Hindenburg Line in September.  By early October, the exhausted Australians were withdrawn from battle.  They had achieved a fighting reputation out of proportion to their numbers, and had come at a heavy cost.  They suffered almost 48,000 casualties during 1918 alone, including more than 12,000 dead.

At 11 am on 11 November 1918 the guns on the Western Front fell silent after more than four years of continuous warfare.  The allied armies had driven the German invaders back, having inflicted heavy defeats upon them over the preceding four months.  In November the Germans called for an armistice (suspension of fighting) in order to secure a peace settlement.  They accepted allied terms that amounted to unconditional surrender.

In the four years of the war 416,809 Australians enlisted for service, representing 38.7% of the male population aged 18 to 44.  Over 60,000 died during their service, with over 155, 000 wounded in action.  Many of the ex-serving personnel suffered from illness or life-long trauma as a direct result of their service.

The social impact of the losses and injuries suffered by the people of all nations involved, cast a long shadow over the post-war decades.

The 11th hour of the 11th day of the 11th month attained a special significance in the post-war years.  The moment when hostilities ceased on the Western Front became universally associated with the remembrance of those who had died in the war.  This first modern world conflict had brought about the mobilisation of over 70 million people and left between 9 and 13 million dead, perhaps as many as one-third of them with no known grave.  The allied nations chose this day and time for the commemoration of their war dead. 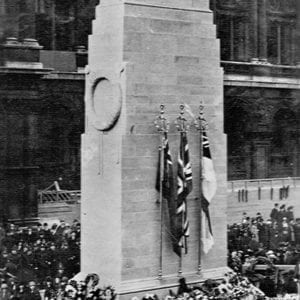 At the new Cenotaph in London, on the first anniversary of the Armistice in 1919 two minutes’ silence was instituted as part of the main commemorative ceremony.

On the second anniversary of the armistice in 1920 the commemoration was given added significance when it became a funeral, with the return of the remains of an unknown soldier from the battlefields of the Western Front.  Unknown soldiers were interred with full military honours in Westminster Abbey in London and at the Arc de Triumph in Paris.  The entombment in London attracted over one million people within a week to pay their respects at the unknown soldier’s tomb.  Most other allied nations adopted the tradition of entombing unknown soldiers over the following decade.

After the end of the Second World War, the Australian and British Governments changed the name from Armistice Day to Remembrance Day, to better reflect the commemoration of all war dead.

In Australia, on the 75th anniversary of the armistice in 1993, Remembrance Day ceremonies again became the focus of national attention.  The remains of an unknown Australian soldier, exhumed from a First World War military cemetery in France, were ceremonially entombed in the Memorial’s Hall of Memory.  Remembrance Day ceremonies were conducted simultaneously in towns and cities all over the country, culminating at the moment of burial at 11 am, and coinciding with the traditional two minutes’ silence.  This ceremony, which touched a chord across the Australian nation, re-established Remembrance Day as a significant day of commemoration.

Four years later, in 1997, Governor-General Sir William Deane issued a proclamation formally declaring 11 November to be Remembrance Day, urging all Australians to observe one minute’s silence at 11 am on 11 November each year to remember those who died or suffered for Australia’s cause in all wars and armed conflicts.

Each year on this day Australians observe one minute’s silence at 11:00, in memory of those who died or suffered in all wars and armed conflicts.

In Canberra, on Remembrance Day the Australian War Memorial hosts the Nation’s key commemoration.  The ceremony includes a formal wreath laying and is attended by many dignitaries, diplomats, school students, as well as thousands of members of the public.  Australia’s Federation Guard and the Band of the Royal Military College Duntroon is on parade. 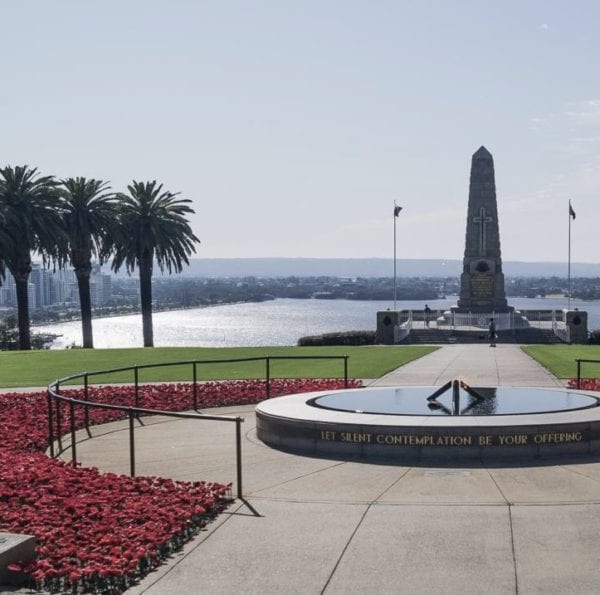 Remembrance Services are also held at the Kings Park War Memorial.  Remembrance Services are silent (Memorial Inscription ‘Let Silent Contemplation be your Offering’) except for the recital of the Ode and the playing of the Last Post and the Reveille or Rouse, although sometimes music may be played when there are a large number of wreaths to be laid.

Services are conducted using the format as follows:

This marks the end of the Service and welcomes, addresses, prayers, hymns and the National Anthems may be played as appropriate to the occasion.   Following this, the Catafalque party is dismounted, followed by the Honour Guard.

All repeat: “We will remember them”

Commemorative address by President of Sub-Branch 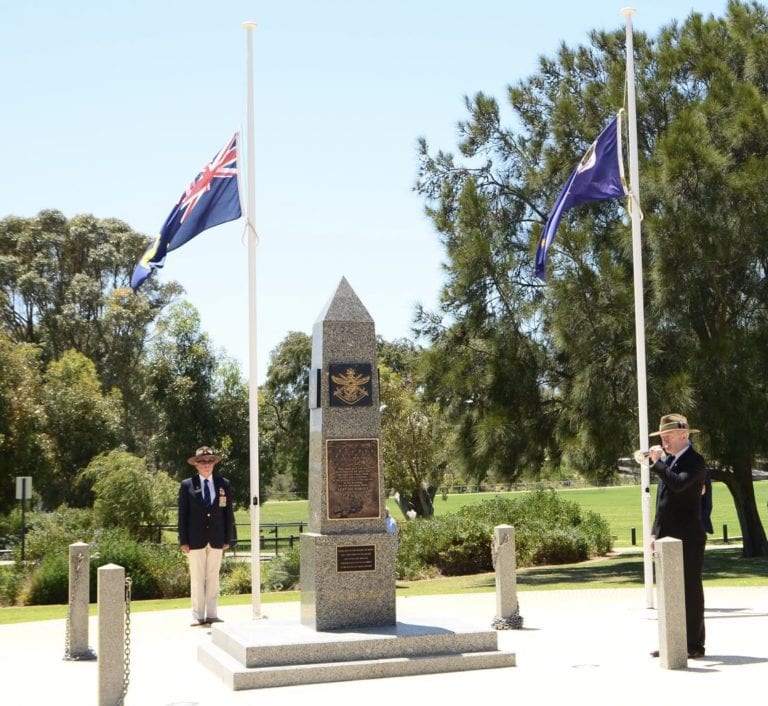